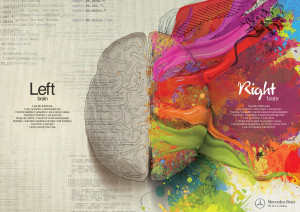 You know those quizzes that are supposed to tell you if you are a right brain person (creative) or a left brain person (logical)? Every time I take one, I’m right in the middle. Creative, with a little bit of logical sprinkled overtop. Which I always translated to mean that I’m just not that creative, or that logical.

What?? It can change?

Yeah, it can. And I think it’s because as a web designer I use a lot more of my creativity than I ever have before. I need the logic part to be able to actually code the design, but that takes way less effort for me than the creative part.

So, I guess you could say I’ve been cultivating my right brain tendencies.

And man, is that showing up all over my life.

As you can see in the illustration to the right, Right brain often = messy.

The messiness is the part I’m having trouble dealing with. Because I’m a very organized, very neat and tidy kind of gal.

I don’t like crap laying around the house, and I literally can’t work if things aren’t clean. But in the last few months I have totally slacked on the neat and tidy.

Last week my left brain decided to stage a revolt. I walked past my kids playroom and realize the desk in there was piled with stuff. The drawers were stuffed full and I just couldn’t take another minute.

I was in the middle of work, so I couldn’t take care of that night, but the very next morning I jumped up and dumped everything out on the floor. I ended up cleaning out the entire playroom and playroom closet.

And in the midst of the mess, I found my missing diamond ring. (It had been gone for nearly a year).

I also found myself sitting in the middle of what looked like the aftermath of a tornado. And I realized that’s kind of how my whole life has been feeling.

Just too messy to really get anything done properly and/or efficiently.

It’s fine to cultivate your creative side – but I realized that letting my logical side jump ship was not an option anymore. I have to consciously work on getting myself balanced again – or I might lose one of my kids in the mess.

Any tips for cultivating both hemispheres? I know you’ve got to have some…