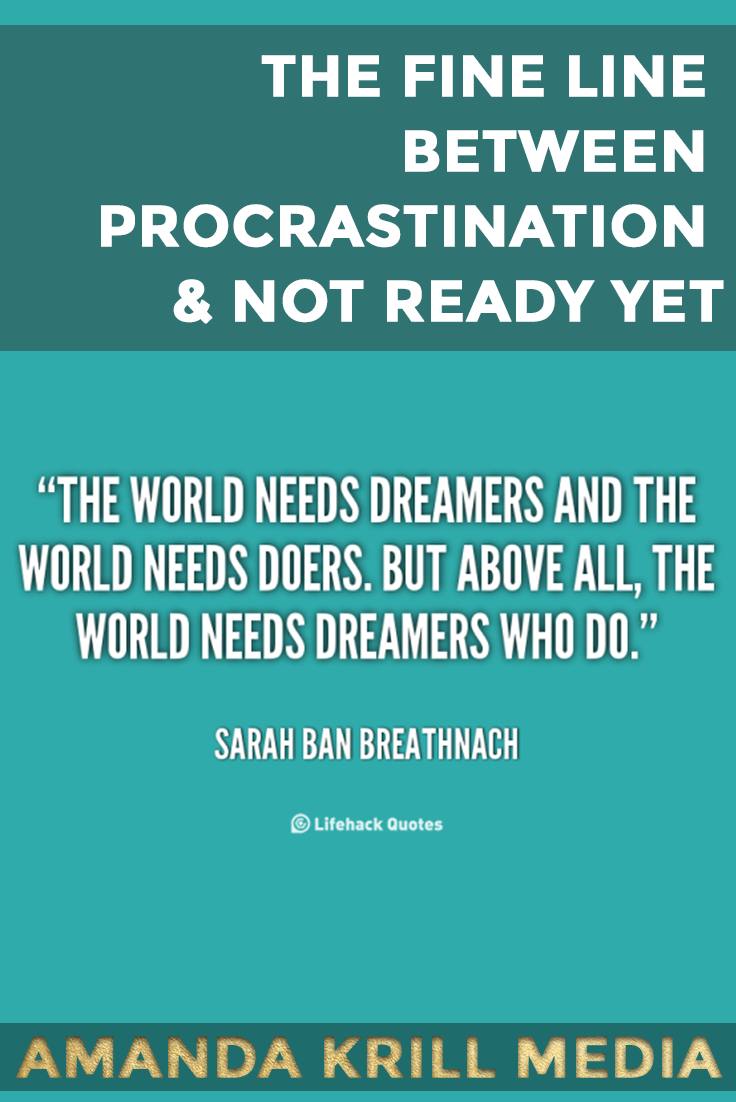 The Fine Line Between Procrastination & Not Ready Yet

You would not believe the number of entrepreneurs that I’ve had this conversation with lately. It’s getting to the point that I think it’s a dirty little secret that we’re all ashamed of – but it shouldn’t be. I don’t know a single one of us that hasn’t been through it. And I’m fairly sure it’s just part of the gig.

Over and over again I have clients that are so fired up about their project. They are excited to get started. We start rolling. Things are going well. And they disappear. Sometimes just a few days. Sometimes a few months.

I’m not saying this to shame anyone. On the contrary. I want my clients and everyone else out there to know I do the exact same thing when it comes to projects that I’m working on.

Sometimes it’s the copy that I get hung up on. I’m a writer, and there are times when the words just can’t be found. Or I write something, let it simmer for a few days, come back to revisit it, and I delete the whole damn thing. Nothing stalls you out quite like starting from scratch when you think you are halfway there.

Sometimes it’s the energy of the project. I’m so excited. I get so much done. And then I’m out of steam.

Sometimes it’s indecision. This isn’t something I struggle with a lot – but when it hits, it hits hard. The project is ready to go – but I just can’t decide how to get it out to the world. I know what I would tell other people to do, but I either just space out on those things, or decide I want it to be different, but can’t think of anything different. Ugh.

And I know when I get into this predicament, I beat myself up for it. A lot. If it was actual punches, I’d look like I just got out of the ring with Mike Tyson and he gave me everything he had.

I feel like a slacker because I’m clearly not giving it everything I have. Or I’m procrastinating for some reason I can’t identify. Or at least those are the things I tell myself.

But the truth is…

I know deep in my bones that it can’t be true. Because there has never ever been a time in my life that I have purposely procrastinated on anything. I’m the girl who would finish a 20 page paper within days of it being assigned even if it wasn’t due for two months. I take care of stuff as soon as it crosses my field of vision, because I know for a fact that I will forget it if I don’t.

I, by nature, am not one to procrastinate. And I don’t believe that most of the entrepreneurs I know are either. How could we be?

So, for all of us, it must be something else.

Here’s what I think it is…

It’s not time yet. That thing you’ve been working so hard on is something the world needs. No doubt about it. But one of you isn’t ready for it yet. Either you aren’t ready to give it all you’ve got. Or the world isn’t ready to see/hear it yet.

I know deep in my bones that this is the case because in every project I’ve ever worked on (mine or someone else’s) nothing is ever done until it’s time for it to be done.

It won’t happen, even if you are pushing hard against all the obstacles. More will pop up.

When it’s time for a thing to happen, it will happen effortlessly. Okay, maybe not effortlessly, but if you are feeling a ton of resistance from all angles, maybe it’s time to just let it rest for a bit.

An example from my own projects…

So, I started writing this book well over a year ago. The reason for writing it was because of a disconnect I see in so many people these days – and the topic is one of the things I’m naturally talented at doing…so I knew I needed to write it.

And then it sat.

One Sunday, I decided that was it. I was finishing it. By the following Sunday, it was done. My darling friends Woz & Lisa proofread it for me (they are pros, fyi), the website was done and I was just waiting on the proof copy of it to make it all live.

The proof arrived. I loved it. I mentioned it on various social media platforms.

And then I did absolutely nothing with it. Nothing.

That was in April.

Then, last week I decided that was it. I had to do something. So, I got in touch with my friend Jessica who wrote an amazing book “Please Validate My Existence“. She’s killing it, and I wanted pointers. She hopped on Skype with me, we talked it out, and I was so excited I could hardly stand it.

I immediately started implementing the things we talked about, and now have a plan for moving forward.

But the thing is – except for like two things, the the ideas she had for me were things I already knew. I just could not for the life of me think of them for my own project.

I’ve got three things for the takeaway on this one.

1. Things are not going to be ready until they are ready. So quit pushing it. You’re just going to end up burnt out and angry.

2. Sometimes walking away for a bit is the best way to finish something. Sometimes it’s for a whole year.

3. Even if you know something, sometimes you need someone with an outside view to say it for you to understand and implement.

Got any other suggestions for me and other entrepreneurs? I know I’d love to hear them. Leave a comment below with your best ideas.