Why FILA and DISH Network get IT, and Huffy doesn’t. 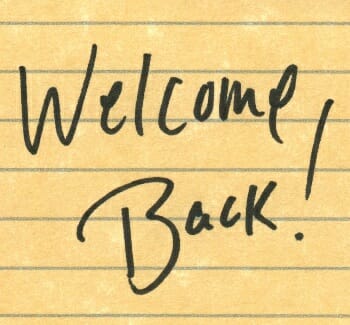 A couple of weeks ago I tweeted to FILA that I was disappointed that my son’s shoes completely fell apart after only two months.

And when I say fell apart, I mean the sole peeled off both shoes and was flapping in the wind.

At first I didn’t hear anything from them, and I just put them on the list of companies I’ll never buy from again.

And then, last week I got an amazing message from the director of their social media.

Less than one week later (and there was even a holiday delaying the mail in there) we got a package with our new shoes. And they weren’t the cheapest ones either. Both pairs were the most expensive pairs currently available on FILA’s website.

AND, to make it even sweeter, the next day, I got a sweet FILA jacket in the mail too.

With a couple of pairs of shoes and a kind, thoughtful email, FILA won me back. In fact, now I’m kinda partial to them.

Months before this incident, I was on the verge of switching from DISH Network to DirectTV. It was partially driven by my strong desire to see Game of Thrones on HBO, but also because DirectTV was offering a pretty sweet deal. I was not in a contract with DISH, and our equipment was outdated anyway.

Within one hour I got a DM from a DISH rep asking me to give him a ring.

I did, and I ended up with a new receiver, 6 months of premium channels and free installation of the new equipment (the new HD stuff at the time).

Both FILA and DISH understood that I was a previously loyal customer who was on the verge of jumping ship. And they did what it took to keep me.

Jump back to August, and check out the vastly different response I got from Huffy.

We were a week out from a super fun camping trip to Marblehead. If you are from Ohio, you know all about Marblehead. It’s a quaint little town on the shores of Lake Erie within sight of the largest of the Lake Erie islands. The husband was getting things ready, like the camper, and the bikes, etc – when he noticed that one of my bike tires was flat AGAIN.

Now I flippin’ love my bike. It’s a Huffy Cruiser, and it’s adorable. (The one in the pic is exactly my bike) 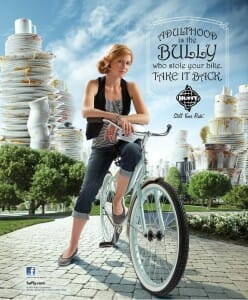 But since I bought it, it’s gotten multiple flat tires. And I don’t even ride it that much. We live in the country and I’m scared to ride on the State Highway that runs in front of our house, so the bike only comes out when we go to Mackinac Island (no cars!) or on camping trips.

The thing is… while I’m an I-can-do-it-myself kind of gal, I don’t know how to fix a flat tire on a bike. I’m sure it’s not that hard, but I can’t do it. So my husband does it for me. And let me tell you, he’s sick of doing it.

He was so sick of doing it, that he wasn’t going to let me take my bike on our super fun camping trip with friends. And everyone else was going to have their bike. Yikes!

So, I turned to google. What was causing all of these flats? It wasn’t overuse, that’s for sure. Turns out, it’s a VERY widespread problem. And it’s because the inside of the rims have metal burrs on them. Hundreds and hundreds of people are having the same problem.

So, as I often do, I turn to social media. I hate to be a complainer, but you know what – when there is a real problem, I think something needs to be said.

First up – Twitter. There are three accounts that appear to be associated with Huffy. None have more than 50 followers or 50 tweets. I tweeted. No response. Not shocking, since it seems they don’t have their twitter act together.

Next Facebook. They definitely have more going on with their FB account, and here’s what I said, and how they responded. 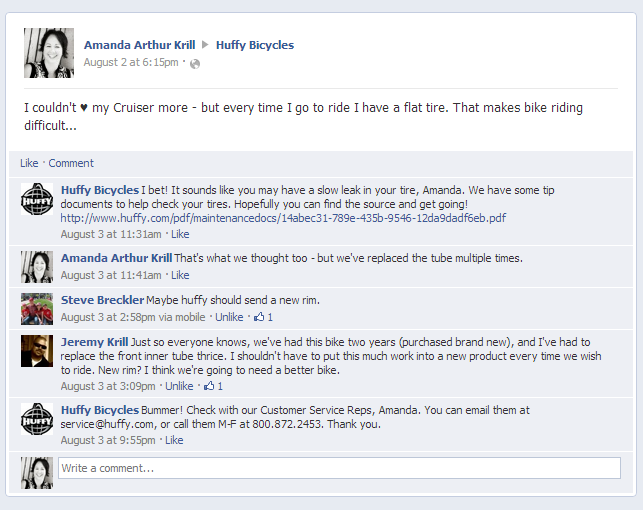 Full disclosure – Jeremy is obviously my husband, and Steve is a good friend (in fact, the male half of the family that joined us for the super fun camping trip). So, of course they are going to stick up for me…and while the Huffy people weren’t rude AT ALL, they could have done more to make it right.

They must know about all the complaints. If they don’t, they aren’t paying attention to what is being said about their bikes on the internet. Rather than direct me to call their customer service reps, who will have to hear my story all over again and really probably have no power to do anything except help me order a new part (that is probably defective too), they should have reached out to me.

DISH and FILA made sure to get in touch with me. They didn’t make me explain myself over and over to fifteen different people while they decided if I should be compensated in some way. They went out of their way to make me happy – and earned themselves a loyal customer.

Clearly, DISH, FILA and Huffy are national brands. You may not be able to send a bunch of free stuff to your clients to make them happy – but you can do something. Listen to what they have to say, fix whatever you can, and learn from/change whatever led up to the mistakes in the first place.

*I do not advocate complaining just to get free stuff – I’m just using examples of times that I have had a sincere issue and how the issue was handled.